It’s been almost 20 years since one of the largest and most successful companies in the world was founded: Google. Although the domain “www.google.com” was already registered in 1997, it was only on 4 September 1998 that the company “Google” was officially founded. Reason enough to take a closer look at Google’s past, present, and future: What makes the company so successful? What consequences do Google’s products have on the economy, society, and politics? And where is the journey of Alphabet Inc., founded in 2015, going in a world dependent on data?

Until 4 September, Handelskraft will be publishing articles on exactly these topics. The beginning is a look into the past: At a time when the Internet was still some sort of wild west, and no one could’ve predicted “GAFA”, Larry Page and Sergey Brin founded a company that was essential to satisfy an ancient human need: Access to any information as uncomplicated as possible.

What was the time before internet search engines like? There were catalogues! More specifically, web catalogues. Already in the early 1990s, there were operators of lists that made it their goal to find as many WWW servers as possible and just to pack these lists in a web catalogue. If one had access to such a web catalogue, one could search at least superficially for web pages with certain content.

Searching for web content in the 90s was anything but simple. If you would like to experience something similar, you can install a TOR browser and try to navigate to a website without prior research – it’s difficult. The creation of web catalogues and thus the indexing of web pages was therefore energetically tackled by some developer teams. In 1993, for example, the World Wide Web Wanderer attracted attention, as it searched the Internet with the help of a bot. A foundation for the web search was laid.

With the search engine BackRub, Brin and Page entered the search engine terrain for the first time in 1996. Unlike similar products at the time, BackRub also considered backlinks to web pages linking to other web pages. The significance of the search results increased. Attempts to sell BackRub to companies such as Yahoo failed in 1998. Therefore, the two founders decided to set up their own company with the financial help of Andreas “Andy” from Bechtolsheim: Google Inc.

How do you make money?

The foundation was laid and within two years, Google rose to the search engine Olympus with about one billion indexed pages … the rest is history, you might think. More important than the search engine itself and the idea behind it was probably the start of AdWords for Google. Even though the company now has a market value in excess of US$500 billion, Brin and Page had to ask the same question at the beginning of their career as many start-up founders today: How do you want to monetise?

Google AdWords seemed to be the right answer to this question. And not only that: The Google Network made the Wild West “Internet” a US mall-like idyll where everyone sees only what they’re interested in and want to buy. Google put in order and raised “data” into a new currency. With this new currency, the revenue from AdWords, and the survival of the dot-com bubble, the way was clear for Google and all of its products developed in the years after 2001.

And that can be taken literally: Most of the products are freely available and free to use, such as Gmail, Google Earth, and Google Chrome. Free in the sense that you don’t have to pay with a tangible currency like money. The use of Google services is still a kind of barter business in which one exchanges access to their preferences, interests, or daily commute to the use these services.

The Google search engine and AdWords were just the beginning of a journey that has fundamentally changed the way we use technology today … Have you recently seen someone walking around with a paper map?

Learn about the next digital trends 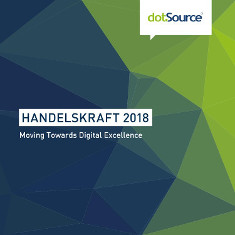 Of course, Google was once considered a company that potentially could just disappear or not grow beyond their initial products and developments. Wondering what’s going on in 2018 and beyond? Then download our 2018 edition of the Trend Book now and find out who and what is trending and could be sticking around for years, even decades to come!