30 March 2019 will go down in history. For the first time, the European Union is shrinking, as it’ll lose one of its members that day. In accordance with Article 50 of the Treaty of the European Union, British Prime Minister Theresa May led the exit process after almost 52 per cent of UK citizens voted to leave in 2016. The exit agreement between the EU and UK, which had been negotiated for years, failed before the British House of Commons. A consequence might be a so-called hard Brexit, without binding regulations between the two parties. What consequences does this have for the current state international online retail? Will this huge amount of chaos also hurt online shopping?

A paradise for retailers: The European Union

The European community is working towards common goals to ensure peace and security for the people of Europe. In addition to laws to abolish roaming charges in mobile communications, we owe the EU, above all, open borders within Europe. We personally benefit from this by being able to cross borders without passport control.

But thanks to the EU single market, trade within Europe works without any limits. Us consumers benefit from this because we can compare prices throughout the EU and order from the cheapest supplier without having to be from one of the 23 countries with the common Euro currency. Accordingly, the UK is the second most popular country (after China), where German customers shop online.

According to the E-Shopper Barometer of parcel service DPD, more and more EU citizens trust international online stores. In 2017, 54 per cent of all online shoppers shopped at least once on an international website. 67 per cent of them are in Europe. And what’s the most popular European country among international buyers? That’s right. The UK! Almost one-third of all international shopping carts from EU-shoppers are full from UK-based stores.

After a no deal Brexit, all benefits of this single market are lost for the UK. Free trade within the EU is followed by sharp border controls and tariffs on both sides, but also longer parcel transit times.

In the future, EU customers will think twice about accepting additional costs and longer waiting times. Compare, for example, current delivery times of an insured DHL package coming from the UK with those from Norway: With an average of 7.5 working days, it takes a whopping 250 per cent longer to receive the parcel from the Scandinavian non-EU country than from the UK. Also, such a package is by default twice as expensive, even if retailers create their own contracts with shipping providers.

Overall, British online retail has been struggling with the threat of Brexit since the vote in 2016. Andy Mulcahy, Strategy Director at UK online retailer IMRG, recently pointed out in the Guardian that retailers have already changed themselves in the face of Brexit into a veritable spiral of discounting and thus lost the trust of customers.

If it comes to a hard (non-contractual) Brexit, just see many medium-sized, British online retailers who also ship internationally, have only one solution: They plan to migrate their businesses partially to Germany. Like Shaun Loughlin of the sportswear mail order company, Freestyle Extreme, from Bristol, who’s been running a German version of his website for years.

Europe’s largest economy is more popular with UK investors for branch offices than any other country: And in 2017, 152 companies from the United Kingdom settled in Germany. This won’t just make competition within Germany harder. Their goal is clear. Easier access to the European market.

People in the UK also like to shop internationally. According to Statista, in 2018, 28 per cent of all Britons shopped online in another EU country’s store. The most popular European trade relationship is between Britain and Germany. In total, goods worth £65,761 million were imported into the United Kingdom from Germany. The front-runner!

The return of customs barriers

But what does a hard Brexit mean for customs duties on exports to the EU or imports from the EU? The German customs authority emphasises that without a privileged partnership or free trade agreements for the movement of goods with Great Britain, general customs regulations apply.

Let’s take a look at the example shipment of clothes ordered in the USA or a photo lens ordered directly from China. If the contents of both packages exceed a value of 150 euros, it’ll get more expensive.

For textiles, you have to pay a duty of twelve per cent of the value of goods and for the lens, 6.7 per cent in value is added. In addition, you have to pay an import tax of 19 per cent — a tax, which is already payable for packages starting at a value of 22 euros, even if it then costs no duty.

The matter is so complicated and associated with waiting at a local customs office if you have to pick up a package personally. And of course, British customers will soon expect a similar procedure if they order something in the EU.

How the UK economy will suffer

The uncertain future has been making the financial market in the UK nervous for some time and the Sterling strong against the dollar after the Brexit referendum.

Even more: Many companies in internet retail use software from the USA. Entire e-commerce platforms, hosting providers, and other technologies are mostly from overseas. These are often tied to a dollar price. The increased dollar price per pound makes software usage an increasingly expensive proposition.

And what’ll happen with GDPR in the UK? After a hard Brexit, Britain is classified in the regulation as a so-called »unsafe third country«. The transmission of personal data beyond EU borders would then, according to articles 40 to 50 of the GDPR, would be past its prime.

The EU and the UK could gradually agree on data transmission rules and ensure data protection through a future free trade agreement. The US and EU have also signed such an agreement through the EU-US Privacy Shield.

If no agreement is reached after Brexit, at least individual companies could, according to Article 46 of the GDPR, use »suitable guarantees« to prove corresponding data protection and thus obtain personal data from the EU.

Shipping, customs, GDPR —  changes for online retail in the case of a hard Brexit are enormous. Higher trade costs, fewer exports to the EU, and declining direct investment into the UK will slow down the economy on the island, even if there is no EU competition.

Economics professor Bernard Fingleton has researched what reduced trade between the EU and Britain means for the UK labour market: Even if it falls by two per cent after Brexit, 66,500 jobs will be lost in London alone by 2025.

Brexit with a fixed deal

If contrary to expectations, the British government and the EU agree on a withdrawal agreement, businesses and online shoppers who are eager to shop can breathe a sigh of relief for the time being. A transitional period of two more years would further guarantee free trade and wouldn’t impose tariffs on goods crossing the EU border. Until 2020 everything would be the same. That would bring one thing to online sellers and citizens alike: Time to prepare better for the exit of Great Britain.

What’s coming in the digital future? 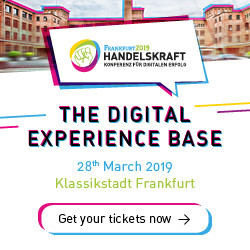 Want to know what’s coming? Then you need to be at the 2019 Handelskraft Conference in Frankfurt am Main at Klassikstadt this year. On the 28th of March, you’ll get to take part, connect, and level up not just your personal wealth of knowledge, but also your business. Now is the time to connect with like-minded individuals and digital experts. Enjoy keynotes and of course a gastronomic feast all our participants have grown to expect. What are you waiting for? Get your tickets now!