It seems to be trend as the moment, that old, well-established companies banding together in order to finally be able to challenge the large tech conglomerates. So the Pangea network, consisting of CNN, The Guardian, The Economist, The Financial Times and Reuters, is supposed to be standing against Facebook and Google.”United we stand” – that’s what the German banks are also thinking as they plan a conference on PayPal at the end (!) of the year.

Although the general mood is anything but positive. There has already been talk of a flop before it had even got started, which the banks could also do without. It isn’t even the late start of the proposed service which at fault in all this misery, but the banks’ lack of flexibility in these times of digitalisation. Could an online payment services from the German credit institutions become more successful than PayPal?

The technical aspect of payment with Pay Direkt – that’s what their calling the service at the moment – is looked after by the “Gesellschaft für Internet und mobile Bezahlungen,” the association for internet and mobile payment. This is a company which was founded by the Deutsche Bank, Postbank, comdirect Bank, Commerzbank, an investment group of private banks (incl. ING-DiB and the TARGOBANK) and lead by the HypoVereinsbank, Volksbanken, Raiffeisenbanken and the Sparkasse. At least you can’t say that Pay Direkt service isn’t broadly positioned.

» Bankenverband: the new payment process will be available to millions of bank customers, who buy online, right from the start. With this industry-wide cooperation, the banks offer consumers and traders a unified online payment method. «

The Sparkasse’s participation is most interesting. After all, the credit institution already has experience with the online payment sector because of Giropay, and around 50 million customers.

It is understandable that the German banks are shaking at the knees. Over the past years, PayPal has become an institution when it comes to internet payment, with 161 million users, who moved 227 billion US dollars in 2014. International, fast, uncomplicated – that’s how the eBay daughter (still) have presented themselves in the last years…the very successfully!

The price model for traders is 1.9 Percent + 0.35 cents per transaction. Traders have to decide whether or not this is too much for themselves. But PayPal does seem to be popular. According to a current study from ECC Cologne, 75.8 percent of the 562 traders surveyed use the service and 6.8 plan to integrate it.

PayPal is often used on the side of the customer as well. With 85.7 percent, it is still less known than billing (95.6 percent) and direct debit (87.6 percent), but way ahead of Giropay (20.3 percent) and other payment systems. By the way, the use of this most popular payment service is a real conversion booster for online shops and you can find out more about this in our free Conversion Whitepaper (available in German only).

What does a payment service have to offer?

Right now Pay Direkt could of course offer lower fees than PalPal. After all, the service has the largest banks in Germany backing it, which hould so something for marketing and getting people interested.

If everyone who has an account with one of the banks mentioned is also a Pay Direkt customer, at least there is a solid customer pool right from the start. Whether or not they use the service will be visiable in the volume of money being moved.

There are no plans for a mobile payment solution from Pay Direkt to start with. Their would rather see a rise in the trend before integrating it somehow in 3-4 years. Digitalisation looks a little different. It shows that mobile payment is one of those things you should definitely have on the radar. Everyone who has been in Sweden in recent years knows what I’m talking about.

» Economist: Sweden has shown that m-commerce can be safe and easy—two barriers that have previously prevented its adoption. «

There are not only successful companies in the area of mobile payment (Klarna, MyWallet), but m-commerce is actively being used there. Possible good condition for traders and a broad customer base – all well and good. But without want to speak of the stereo typical German angst, there is another factor in Germany which is an elemental for the success of a payment service and which we have often spoken about on Handelskraft: Trust. In these times of capital-greedy bank giants, the US payment service PayPal seems to be the innocent lamb, despite possible involvement in the weapons’ trade. The German’s trust PayPal, so why choose another payment method at the checkout?

Are the banks in a tight spot?

This is exactly the question which the board of the “Gesellschaft für Internet und mobile Bezahlungen” is asking themselves are the moment. Chanting the mantra of the three most important trust factors, good conditions, and a possible future entrance into mobile payment aren’t enough. The banks have to delivers and show that they have understood the structure of digitalisation.

There seems to be little risk in already calling Pay Direkt a flop. But if anyone can bring competition for PayPal to the market, then it is the banks and credit institution who know their way around money. The challenges are the digital leaps and the ready to innovate at PayPal, Google, Amazon and Apple in the area of payment.

If the banks want to enter the field with internet payment service and mobile payment in the future, they have to keep up with the giant tech companies and that requires more than just a cheap PayPal copy which is also late on the market.

Find out more in our white paper: “Digitale Transformation: Challenges for Marketing, Sales and IT” 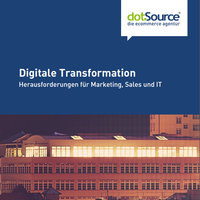 In our Whitepaper “Digital Transformation” we look at the changeover process of trade and show that the way to a digital world does not have to be a long one. Digitalisation does not just include the consumer, but increasingly also traders, who have to adjust to the function of smart phone in the purchasing process for instance.
The white paper can be requested here. Currently only available in German, but the English language version is coming soon, so stay tuned!

One thought on “German banks in the digital transformation: challenging PayPal – could it work?”