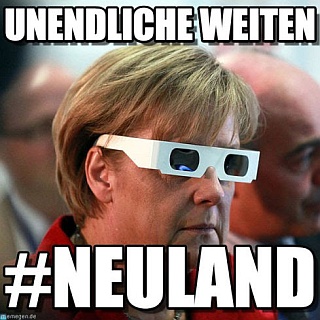 Current numbers show what has long been supposed: when it comes to internet know-how, the Germans aren’t doing so well. We’re doing even worse compared with other European countries. Only five percent of the population can claim to have good internet skills. That is fewer than in almost any other European country. The Germans don’t know how the internet works. Angela Merkel’s #Neuland is closer to the reality than we thought.

Little wonder then, that the Germans still have a rather ambivalent relationship to e-commerce. On the one hand, ordering online has long been part of everyday life, one the other hand, there have seldom been such controversial discussions on online trade as in 2014.

>>Neuland<< has been making a lot of noise in the last year and is more present in public discussion than it has been for a long time. The entire Federal Republic should also know who Oliver Samwer is by now. Persistent strikes and ‘revealing’ reports, which draw attention to the working conditions the logistics centres of big businesses, have changed the population’s overall image of e-commerce permanently.
The branch has often been held-up as a spectre of the modern working world in relevant talk shows. After all, the example of logistics centre staff makes clear what threatens many professions: standardisation, automatization, and finally, replacement by robots.

The internet is everywhere

Apart from these discussions and typical scepticism, the practice shows a very different picture. The internet has long been self-evident and indispensable in everyday life, even on the go. As ever more application wonder onto the screen of mobile end devices, being online has become as self-evident as breathing and has changed our thinking and actions.

This development continues thanks to wearable technology. The internet is now wondering towards, and into, the body and as the >>internet of things<<, doesn’t stop before it reaches the private sphere. Our own apartments are now becoming the control centre of the digital self. Thanks to the purchase of >>nest<< Google will soon know what happens in the apartment of the user. >>Quantified self<<, the racking and analysis of movement and your own habits in every life also provides deep insights into the life of the customer.

Ever more small large and small everyday problems are taken up by technology and digital solutions for them are presented. In comparison, some things which used to be controversial are now a self-evident part of everyday life. Especially in the eyes of the customer.

There is a large discrepancy here between that which is expected and that which has already been implemented by traders. 20 percent of Germany’s top online traders still don’t have a mobile optimised shop. There won’t be a blueprint for successful multichannel concept in the next few years either.