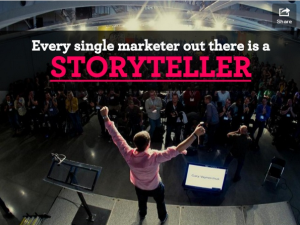 Gary Vaynerchuk, entrepreneur and social media expert is stunned: 99 percent of marketers still run marketing and advertising as though it were 2004 not 2014 – via print, TV, radio, or billboards.

He summarised what is catastrophic about this in the slideshare presentation below. Traditional channels are not half as valuable as they used to be. People waiting for the bus don’t look at billboards anymore; they look at their smart phones. E-mails are the plague of western civilisation and thanks to google, have finally disappeared into the inbox’s very last drawers.

Service and value propositions have simply changed. The ROI of classic advertising has reached rock bottom in comparison. This is because customers’ attention has shifted and continues to do so at high speed. At a time when ADHD is becoming the social norm, time and attention are becoming valuable goods.

The guest who only speaks about himself

At the end of the day, it comes down to putting your user promise into words, or rather, a story. After all, it isn’t the media, but the capable sales person, who gets the customer to buy something.

But what do marketers do on social media? They bombard their target groups, like billboards earlier, and later our e-email inbox. They misunderstand, that here is it about the first platform with a two way channel, which makes conversations possible.

Social media, especially Twitter, are the cocktail parties of the internet. Just like at a party, it is not a good idea to talk about yourself the whole time. The goal should be interaction, in order to actually create benefit. This is exactly what marketers should do.

Respect the peculiarities of user groups and media

Every platform hides its own peculiarities; an Instagram user has a different motivation to someone on Pinterest or Facebook. Only those who have understood every network for themselves can communicate there effectively and appropriately. The stories a person has to tell must be adapted accordingly.

To stay with the party example, not every small talk topic works for every occasion.

Those who do not learn and keep addressing their customers as though it were 2004 will be left by the wayside.

Storytelling in 2014 from Gary Vaynerchuk