The tech industry isn’t the only thing that’s being moved by digital technology. Farming’s getting high-tech! Tractors and combined harvester? Controlled via GPS. Irrigation planning? Supported by AI. In the field, in the vineyard, on the water: Data is collected everywhere and transmitted to the central computer. For example, the farmer can monitor the route of the vehicles, react to weather conditions, and simply optimise processes.

»Digital Farming«, »Precision Farming« and »Smart Farming« are no longer foreign phrases for farmers. But what does the future hold for agriculture?

The following scenarios aren’t just conceivable, but also somewhat already a reality. An AI evaluates data collected by sensors, so it automatically determines the optimal feed quantities and feeding times and adjusts the automated processes accordingly.

Small machines sow at the best time, large machines order the field without human intervention. In the sky, there are drones that specifically target pests instead of spraying the fields with pesticides and monitoring the tasks of automated agricultural machinery on the ground.

Sensitive environmental data, such as the water and nutrient content in the soil and in the plants as well as current weather data are recorded by sensors and sent to the cloud for further processing. In this, all possible information is collected as big data.

In agriculture, millennia-old knowledge and the willingness to apply new technologies complement each other: Even with the use of GPS data, agriculture was a pioneer of autonomous driving. Travel routes could thus be better optimized and self-driving vehicles used.

In terms of digitization, too, farmers are pioneers, at least in Baden-Württemberg, Germany. As early as 2015, around 30 per cent of the value chain in agriculture was equipped with sensors and software. In comparison:In the automotive industry there were only about ten per cent at that time, and that in the country home to BMW, Porsche, and Mercedes-Benz.

Expectations are high, as various sensors can be used to measure necessary data, such as ingredients in the soil in real time, and to selectively implement nutrients from automated machines at lower nutrient sites in the field.
Other ground sensors measure the moisture content in the soil and allow more efficient irrigation.

An AI with access to the cloud where the collected »big data«  is located analyses the data and evaluates it. In this way, the farmer can bring up the developments in a dashboard and react to changing environmental conditions in the shortest possible time.

The three most important keywords on the subject of agriculture 4.0 have already been named:

But what exactly is meant by that? Let’s take a look behind them:

Smart Farming is based on Precision Farming, because the analysis of the data collected helps farmers make their decisions.

Finally, Digital Farming summarises all these components. It describes the applied methods of precision and smart farming and the networking of internal and external nodes, as well as the use of cloud services including big data analysis.

Digitisation is a question of infrastructure

As with any new technology, the same applies to agriculture: If you want state-of-the-art technology, you have to invest. But can smaller companies afford that? Or will the boom of digitisation lead in the long term to a »landgrave«, a purchase of agricultural land by big farmers, to crowd out of small farmers?

Probably the biggest hurdle for the digitisation of agriculture is radio spectrum. Especially in rural areas, they are often slowly developed.

If one compares the expansion of the network across Europe, Germany lags far behind in terms of domestic 4G coverage. Take, for example, Uckermark: There, 7.5 per cent of the working population in agriculture are employed whereas the national average is 4.5 per cent. At the same time here are Germany’s slowest data connections. 5G on the often biodynamically cultivated fields near Gramzow, Grünow, Göritz? Unthinkable.

The German Agricultural Society (DLG) is also criticising this and calls for a nationwide expansion of good service because it’s essential for today’s agriculture.

Not only grow but also harvest data 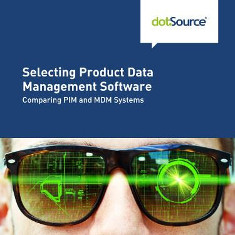 Dealing with analogue combined harvesters is one thing. Controlling smart agricultural machinery and, above all, making intelligent use of the data transmitted by them is the other thing.

The number of software that can be used to manage the data obtained quickly, easily and in a resource-conserving way is similar in its variety to potato or apple varieties. Which fits best to which company?

In our white paper »Selecting Product Management Software«, we look at various software solutions and assess their suitability for a wide variety of industries and applications. In addition, it contains hints for decisive selection criteria and visualises the developments in the dotSource Vendor Matrix: PIM!

The white paper is available exclusively for retailers, manufacturers, and publishers here as a free download.